For us creature lovers, many nonfiction books about animals can be just as pleasurable as fiction. As a matter of fact, one of my all-time favorite animal books is nonfiction: “Homer’s Odyssey.”

(Click on any book image to see it on Amazon.com)

“Homer’s Odyssey” by Gwen Cooper
The last thing Gwen Cooper wanted was another cat. She already had two, not to mention an underpaying job and a recently broken heart. Then Gwen’s vet called with a story about a three-week-old eyeless kitten who’d been abandoned. It was love at first sight.

“All Creatures Great and Small” by James Herriot
Delve into the magical, unforgettable world of James Herriot, the world’s most beloved veterinarian, and his menagerie of heartwarming, funny, and tragic animal patients.

“Born Free” by Joy Adamson
Read the extraordinary story of a lion cub transitioning from captivity to the wild. It’s particularly important now when so many wild animals are dwindling because of human encroachment on natural habitats.

“Cats in the Belfry” by Doreen Tovey
Doreen and Charles Tovey were used to opening their doors to various pets: from Shorty, their highly-strung budgerigar to Blondin, a mischievous squirrel, but they never owned cats. To deal with mice, they got a kitten, but Siamese aren’t “normal” and soon their world was turned upside down.

The Three Kitties That Saved My Life by Michael Meyer
Michael Meyer says, “When tragedy struck, I thought for sure that my own life was at an end. I was wrong. This is the true story of how two stray rescue cats and a woman named Kitty, whom I finally met after a wild ride of internet dating, brought love, romance, and laughter back into my life.”

“Dewey the Library Cat” by Vicki Myron & Bret Witter
Abandoned in a library book drop in the dead of winter, a kitten somehow survived the coldest night of the year. Dewey Readmore Books, as he became known, took to his home inside the library, charming the struggling small town’s library-goers. He gained worldwide fame as proof that one small cat could change a town, one reader at a time.

“Animal Investigators” by Larel A. Neme
“As he climbed off the vehicle and made his way to the huge mass, his eyes confirmed what his heart already knew: it was a dead, headless walrus.” While writing as if plotting for fiction, Neme takes the reader into the world of forensic science that’s focused on solving crimes against wildlife.

“The Lost Art of Reading Nature’s Signs” by Tristan Gooley
What does it mean if you smell smoke on a cold morning, but you know nothing is burning? Gooley answers the question and 849 others that will be a boon for the nature lover, the camper, the climber, and those who are always curious about the world around them.

“The Inner Life of Animals” by Peter Wohlleben
“Horses feel shame, deer grieve, and goats discipline their kids. Ravens call their friends by name, rats regret bad choices, and butterflies choose the very best places for their children to grow up.” Through stories of the author’s own experiences, enter the world of animal thought.

“Saving Sadie” by Joal Derse Dauer & Elizabeth Ridley
“Her back legs are paralyzed,” the volunteer explained. “She can’t stand, she can’t walk, and she’s urinary and fecally incontinent.” A bad beginning for a dog, but Sadie got lucky when Dauer took her in. Even those not inclined toward dogs should enjoy this book.

“The Perfect Horse” by Elizabeth Letts
A troop of American soldiers discovers that Hitler has stolen purebred white horses he keeps in secret behind enemy lines with an eye to creating an equine master race. But the starving Russian army closing in, and the animals are in danger of being slaughtered for food. A rescue operation is launched by the Americans. (The writing is intricate in places, and may not be for everyone.)

“Joey: How a Blind Rescue Horse Helped Others Learn to See” by Jennifer Marshall Bleakley
Could a financially struggling ranch afford to take care of a blind horse that no one else wanted? Could Joey, the horse, learn to trust people even though the world had hurt him so badly? And what would happen–to Joey, the kids, and Hope Reins–if they failed? This is a true story of friendship, a story in which Joey will touch your heart.

“Seabiscuit: An American Legend” by Laura Hillenbrand
Seabisquit’s success surprised the racing establishment, which had written off the crooked-legged racehorse with the sad tail. Three men changed everything, three of perhaps the most unlikely men, and Seabiscuit is still remembered more than eighty years later. This is the story of those three men and of a very surprising horse. 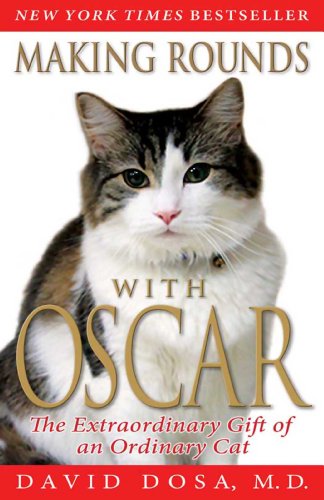 “Making Rounds with Oscar” by David Dosa, M.D.
Oscar is a nursing home cat, a standoffish sort that doesn’t bother much with anyone, but when a resident in the nursing home is close to death, Oscar is there, giving his friendship. He’s aware before anyone else is, and it seems he considers it his job to be there. One doctor watched this and tells the poignant story. (The link is for the Kindle edition because paper seems hard to come by.)

“Until One Has Loved an Animal” by Mildred A. Drost, DVM
Subtitled “How Pets Affected One Vet’s Soul,” this book recounts her experiences, from the porcupine quill-decorated dogs to the cat who steals geraniums in the night. Both the serious and the humorous are explored, but so are animals emotions along with those of humans who love these wonderful creatures.

“The Compleat Cat” by Cleveland Amory
Cleveland Amory spent much of his life as an animal rights advocate, and his love of animals certainly comes through in this volume that contains three of his bestselling books: “The Cat Who Came for Christmas,” “The Cat and the Curmudgeon,” and “The Best Cat Ever.” Each is part of the story of Polar Bear, a white cat he rescued as a forlorn kitten in a New York City alleyway. You can also purchase each of the books separately.

“Rat Care: The Essential Guide to Ownership, Care, & Training for Your Pet” by Kate H. Pellham
If you’re thinking about getting a rat or two, or even if you already own one, it’s important to know how to properly care for a rat and how to make it healthy and happy. This book will guide you through the process.

In the Company of Bears: What Black Bears Have Taught Me about Intelligence and Intuition by Benjamin Kilham
Studying black bears in New Hampshire, Kilham sometimes takes in orphaned infants, caring for them with the goal of letting them back into the wild. When one of the adoptees grows up and leaves home, she gives him access to her everyday life, an opportunity to learn much more black bear life.

Down from the Mountain: The Life and Death of a Grizzly Bear by Bryce Andrews
Millie is a smart, protective mother to her cubs, but mountain life is harder as more people move into the valleys. Conservationist Bryce Andrews shows the battle between large predatory animals and the people invading their territory, a tension between shrinking habitat and expanding human settlement. You’ll learn to care about Millie and her babies.

Miracle Mutts by Laura Greaves
These are tales of dogs who survived in spite of everything that was going against them. From the dog given CPR to save him due to a house fire to the one who was shot, and on to the starving beagle who ended up a member of the royal family, these are stories of the indomitable spirit of a dog.

Lessons From Lucy: The Simple Joys of an Old, Happy Dog by Dave Barry
It’s impossible to start reading anything by Dave Barry and then stop. Grin and chuckle your way through this book based on his rescue dog named Lucy who gives him clues on how to remain happy in spite of turning seventy.

Spiders and Their Kin: A Fully Illustrated, Authoritative and Easy-to-Use Guide
An older edition of this book is on my shelf, and if I’m seeking to identify a spider, I go to it before the Audubon book simply because this one is dedicated to spiders, its illustrations are well-defined, and it covers more information. It might also be a better book for young people.

National Audubon Society Field Guide to Insects and Spiders: North America
This book is on my shelf and has served well as an identifier of spiders (and insects). It’s always good to have more than a single reference, so it combines well with “Spiders and Their Kin.”

“Imaginary Animals: The Monstrous, the Wondrous and the Human” by Boria Sax
A compendium of dreams, wishes, and horrors, this book is filled with dragons, mermaids, unicorns, griffins, and all that have haunted the earth since humans gained a desire to define their world. Illustrations going back to medieval times run throughout this 272-page book to augment the descriptions and analysis of fantastical creatures.

“The Cat Who Came for Christmas” by Cleveland Amory
“I could hardly see him at all. It was snowing, and he was standing some distance from me in a New York City alley… He was thin and he was dirty and he was hurt.” It was Christmas Eve, and this was Amory’s first glimpse of what seemed a doomed little cat, a cat that ended up being his own, so to speak. The problem was that Amory was a cranky curmudgeon but the cat was even more curmudgeonly. If you know cats, this is the perfect Christmas book for you.

“The Legend of Zippy Chippy” by William Thomas
Zippy Chippy, a thoroughbred of excellent lineage (Man o’ War, for instance), ran 100 races and lost all of them, sometimes even refusing to start when the gate opened. He ran at his own speed, or perhaps on a whim, but he had attitude, enough of it that he slowly gained fame, people traveling just to see him run and to cheer him on. This is his story told with truth and humor.