It’s a snowy winter evening and you’re curled up in a cushioned chair, an afghan draped across your legs. You’re reading a new book that draws you in quickly and doesn’t let go until hours later when you look outside to find five more inches of snow on the window ledge. You draw the afghan up higher and go back to your book. The snow is pretty, but the book has a talking cat in it. Irresistible. Below are books waiting for you, a cushioned chair, and an afghan. (Click on any book image to see it on Amazon.com)

“Whispers in the Forest” by Barbara Coultry They’re a rare breed called whispering cats who form lifelong bonds with one another, so when Honey loses her family, not once, but twice, she flees with her two kittens into the forest. The tale is told Pilgrim, a beautiful black kitten with emerald green eyes. Run, play, escape danger, and laugh with them as they seek the perfect clearing. (All ages)

“Cat on the Edge” by Shirley Rousseau Murphy This is the first book in a large series of nicely done cozy mysteries that feature Joe Grey, a talking cat and super detective who is accompanied by his talking-cat friends. If you enjoy this one, you’ll have 23 additional Joe Grey books waiting for you.

“The Winter of the Fisher” by Cameron Langford This beautiful novel follows a fisher as he tries to survive during a year in a North American forest, staying with him from infancy to the next spring when his first mating occurs. It’s a story of struggling to survive as he establishes his territory, battles other predators, and faces the harsh months of winter, all of it told in lyrical prose.

“Watchers” by Dean Koontz Travis Cornell had been desperate to find some happiness in his lonely, seemingly cursed life. What he finds is a dog of alarming intelligence that soon leads him into a relentless storm of mankind’s darkest creation.

“Watership Down” by Richard Adams Set in the Hampshire Downs of Southern England, this tale follows a band of rabbits fleeing from the destruction of their home. They travel from their warren through trials and tribulations to a mysterious promised land and a more perfect society. A beautiful classic suitable for all ages.

“A Dog’s Purpose” by W. Bruce Cameron Go through several reincarnations with Bailey, a dog who finds his special person in a boy named Ethan and then seeks him in his next incarnations. The story is by turns funny, poignant, and sad, but the point of it, the love and friendship shown in it, comes through on every page. (all ages)

“The Autobiography of Foudini M. Cat” by Susan Fromberg Schaeffer Foudini writes, “…because I am an older and wiser cat, she looks to me for counsel, and so I have allowed Grace to prevail upon me to set down the story of my life as a housecat in the human world.” And then we’re treated to a recounting of his life story along with observations of those around him, both animal and human. This is a book few seem to know about, but they should.

“Water for Elephants” by Sara Gruen In 1932 during The Depression, a veterinary student with no money and no place to go jumps on a circus train and is soon charged with the care of the animals, one of them an elephant that can’t be trained. At its root, this is a love story, but it’s also a story of the animals in that circus. (Though a bestseller, the reviews are mixed, but the majority are good.)

“Unsaid” by Neil Abramson Veterinarian Helena dies but is haunted by the memory of animals she euthanized, and so she doesn’t move on, remaining to observe her husband, her animals, and in particular, a chimp scheduled for an experiment that she knows will kill the animal. (This is purported to be a tear-jerker. Therefore, I’ll read it.)

“Tamsin” by Peter S. Beagle Back of book blurb: “Arriving in the English countryside to live with her mother and new stepfather, Jenny has no interest in her surroundings–until she finds things on the ancient estate with ties to another world, one darker and older than anything she’s experienced. And then she meets Tamsin.” (Tamsin is a ghost, and so is her cat.)

“Tailchaser’s Song” by Tad Williams Fritti Tailchaser goes on a magical crusade, a dangerous one, to rescue his friend, Hushpad. You’re drawn into the story and into the culture of the cats, ending up living inside the fantasy. Recommended for those who love cats. Those who don’t love them need not apply.

“The Bees” by Laline Paull A story from a honeybee’s point of view? Really? Yes, really, and it’s excellent. It follows Flora 717, a lowly sanitation worker in an orchard hive where homage to the queen and doing your work and only your work is the law. When Flora becomes a forager, able to collect pollen, her way of thinking changes, causing major conflict with both the hive and herself.

“The Fur Person” by May Sarton Based on the true adventures of Sarton’s cat, Tom Jones, this charming novella imagines his journey from stray to gentleman cat, seeing through his eyes, listening as he sings to his world. This is a story for young and old alike.

“Jonathan Livingston Seagull” by Richard Bach You can be a child who’s a proficient reader, a teenager, middle-aged, or old. You can have any station in life. It doesn’t matter because this is a book for all ages and all types. As you fly with Jonathan, you’ll feel the currents beneath your wings, you’ll struggle with him, and you’ll soar with his success. Read this book.

“The Cat Who Could Read Backwards” by Lilian Jackson Braun This is the very first book in a long and popular series of of “Cat Who” cozy mysteries in which two Siamese cats inspire Jim Qwilleran, reporter retired from a city paper to the back of beyond, to solve quaint mysteries in a quaint location.

“Wish You Were Here” by Rita Mae Brown This first of 28 cozy mysteries co-authored by Sneaky Pie Brown, Rita Mae’s housemate, introduces you to the delightful animals who watch out for Mary Minor “Harry” Haristeen and who are also very good at pointing the way to the criminals. The best parts are where you get to listen in as the animals talk with each other. The Welsh Corgi and tabby cat are joined later in the series by a somewhat plump gray kitty with an attitude.

“Fire Bringer” by David Clement-Davies It’s foretold that a fawn will be born with the mark of an oak leaf on his forehead, a fawn that will lead all deer to the freedom and peace they fight for. This is his story. Richard Adams of “Watership Down” fame said of this book, “It is a riveting story and deserves to be widely read. It is one of the best anthropomorphic fantasies known to me.” 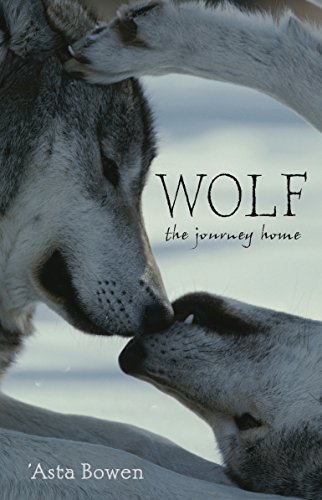 “Wolf: The Journey Home” by Asta Bowen Marta and her pups, displaced by a group of well-meaning naturalists, go on an arduous journey that’s exciting, but also dangerous and even tragic as they travel from high in the Canadian Rockies, trying to return to their home hunting grounds. (ages 8 through adult)

(cats played a role in it), but now he’s a PI working with Bernie, owner of the Little Detective Agency. Told entirely from Chet’s point of view as he and Bernie investigate the disappearance of a teenage girl, you’re sure to fall in love with this doggy detective, but don’t despair–so far, there are nine more in the series for you to read.

“The Catswold Portal” by Shirley Rousseau Murphy Slip through a carved door in a garden down into the Netherworld, a place with wicked queen, elf, harpie, griffon, people who do magic, and shape-shifting cats. Go with Melissa on her journey to find her true nature, both in the lower and the upper worlds. You won’t be disappointed.

“The Art of Racing in the Rain” by Garth Stein Meet Enzo, a dog that knows his next life will be as a human, but for now, he’s best buddies with a race car driver, and soon, the racer’s wife and daughter. Enzo loves life and family, seeing these things through the lens of his other love: car racing.Filled with humor and pathos, it’s a surefire tale for animal lovers. 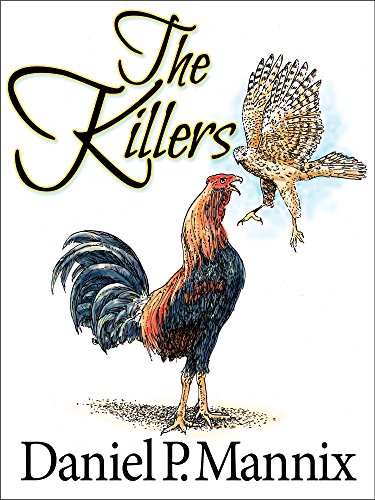 “The Killers” by Daniel P. Mannix Whitehackle, a fighting cock, finds freedom in a simple barnyard where a female Cooper’s hawk endangers the animals Whitehackle protects. Mannix draws you into the lives of these two birds until the final conflict occurs. This story stands out, not just for its bird characters, but also because it’s well-written. Ages 12 and up through adult.

Fluke by James Herbert
The publisher’s excellent description: “He was a stringy mongrel, wandering the streets of the city, driven by a ravenous hunger and hunting a quarry he could not define. But he was something more. Somewhere in the depths of his consciousness was a memory clawing its way to the surface, tormenting him. The memory of what he had once been—a man.”

Castle Roogna (Magic of Xanth, No. 3) by Piers Anthony Restored by Xanth’s magic, Millie, an 800-year-old ghost, is now a desirable woman who wants only Jonathan, a zombie. Magician Dor seeks an elixir to restore Jonathan to full life, an elixer found only in the past. To get there, he goes through a magic tapestry where he meets Jumper, a scary and giant spider, who becomes a fast friend and ally. It’s here that Dor meets the living Millie, but the problem is that his new body is that of a twelve-year old. There are 38 books in the Xanth

“Love Saves the Day” by Gwen Cooper Rescued as a very young kitten, Prudence lives for three years with Sarah, and then one day, Sarah stops coming home. Sarah’s daughter, Laura, takes Prudence home with her, and memories haunt both cat and human. This isn’t a cute cat story. Though much of it is narrated by a cat, it’s a novel about how memories can affect an entire life. Cooper is an excellent writer who draws you into the story, keeping you up late at night reading.

“The Last Unicorn” by Peter S. Beagle A classic is a book beloved by multiple generations, which is a perfect description for this one about a unicorn alone in a lilac wood and who seeks to find others of her kind. With the help of Schmendrick, a magician, and Molly Grue, the unicorn learns about joy and sorrow, eventually ending in a castle where she finds what would lead to the end of her kind. (teens and adults)

“A Dog Named Christmas” by Greg Kincaid When developmentally challenged Todd discovers the animal shelter needs temporary homes for dogs before Christmas, he knows the gift he wants. In spite of objections, the family decides to foster a lovable dog that Todd names Christmas. Caring that dogs are still in cages, Todd convinces the town to join in an “Adopt a Dog for Christmas Program.” This is a tale of peace on earth and good will toward both people and animals.