Coming home from school one day in early spring when he was seventeen, my dad found a small dog on his front porch. It was all black except for a white stripe on its chest, it had a hound’s face, an English bulldog’s body, and a stubby tail. Its coat was matted, every rib in its body was showing, and all told, it was a very lonely, hungry, and exceptionally ugly dog.

My father promptly introduced the pup to the family, they named it Blacky, and within a few weeks of good food and a large loving family, he turned into a healthy, happy pet, albeit an unattractive one, that repaid the family with his total devotion. He paid attention to everything they said, seeming to understand all of it. An ugly dog, but a smart one.

Late that spring, my father’s sister  placed her sleeping baby in his carriage beside the house, leaving a friend to do guard duty while she went shopping. The baby sitter, a man, stayed in the house playing the piano, but he left the front door open so he could see if everything was all right with the child. When my father arrived home, the man told him that Blacky had been running inside and barking, then running back out, then running in and barking again, doing it repeatedly, but nothing seemed wrong. Just then, Blacky ran back in, barked, and ran back out again. My father knew his dog was trying to show them something, and he and the man followed Blacky outside.

Blacky led them to the carriage, then sat down with a worried look at the carriage and then at them. My father and the man looked at the baby, who was still asleep. Nothing seemed wrong, but they decided that maybe the sun was too strong, and so they moved the carriage to the other side of the house.

At that very moment, a car crashed through the fence and hedge and then into the house where the baby carriage had been.

The next summer, my father’s mother, grandmother, younger brother, and Blacky vacationed in an isolated farmhouse north of the city. Upon returning, his mother told him that, one day, Blacky had been restless, fidgety, and obviously nervous about something. They all went to bed that night except for Blacky, who paced. During the night, they were startled awake by the sound of breaking glass, yelling, and very loud growling.

Turning on the light, they saw a man partway through a shattered window, his arm tightly held in Blacky’s teeth. The man managed to yank his arm free and disappeared quickly. Blacky then lay down calmly and fell asleep. Nothing bad happened for the rest of their vacation.

from the family album

Two years later, my father took off for California in a decrepit Model A Ford with a friend. It was the kind of spirit journey that young people often embark on, but after staying on the other side of the country for a few months, he realized his happiness lay back home with family. It was summer when he took a train back home, getting off at the station a few blocks from his uncle’s house in New Jersey where the family always spent their summers.

He’d only just begun his walk to the house when an ugly little dog came speeding down the road to him, then excitedly accompanied him to the house. Later, his mother said she’d known he was coming home because Blacky had been sitting since sunup in the road staring toward the train station.

That little mutt, it turns out, wasn’t ugly at all. He was beautiful.

Do you love the spirit of a mutt? How about a small selection of “mutt” books?

Miracle Mutts by Laura Greaves
These are tales of dogs who survived in spite of everything that was going against them. From the dog given CPR to save him due to a house fire to the one who was shot, and on to the starving beagle who ended up a member of the royal family, these are stories of the indomitable spirit of a dog.

Lessons From Lucy: The Simple Joys of an Old, Happy Dog by Dave Barry
It’s impossible to start reading anything by Dave Barry and then stop. Grin and chuckle your way through this book based on his rescue dog named Lucy who gives him clues on how to remain happy in spite of turning seventy.

Fluke by James Herbert
The publisher’s excellent description: “He was a stringy mongrel, wandering the streets of the city, driven by a ravenous hunger and hunting a quarry he could not define. But he was something more. Somewhere in the depths of his consciousness was a memory clawing its way to the surface, tormenting him. The memory of what he had once been—a man.”

Nubs: The True Story of a Mutt, a Marine & a Miracle by Brian Dennis, Kirby Larson, & Mary Nethery
This is the story of a feral dog befriended in Iraq by soldiers, a dog who was malnourished, showed signs of abuse, and yet sought companionship from the marines. The photos throughout tell the tale of one of the dogs soldiers have managed to save from war zones. Though targeted for readers aged 7 through 10, adults will enjoy it too.

Mutt Dog by Stephen Michael King
Mutt Dog deserves a home. He’s smart and courageous, but he’s without love and food. This is his story and how he finds a place where he belongs. (Preschool to age 7) 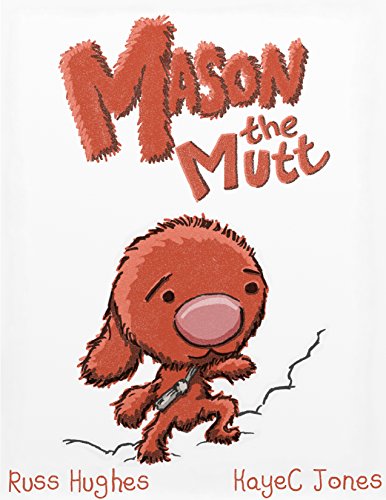 Mason the Mutt by KayeC Jones, illustrated by Russ Hughes
Mason the puppy enjoys a ride in a car, but is instead abandoned to life of trying to survive, which he does in spite of bullies and injuries. His luck turns when he ends up in an animal shelter and meets a dog who urges him to be courageous. Eventually, he’s adopted by a little boy and mother, finding his forever home. (Ages 3 to 8)