The squirrels scattered when I went outside to pick the mint that grows at the back steps, a single mourning dove remaining, placidly pecking at the ground. I gathered a few stalks and then went back inside, glancing out the window to see if the squirrels had returned yet. They hadn’t. However, from the woods at the other end of the lawn, I watched a black bear emerge.

“How pretty,” I thought, immediately deciding it was female because she was smaller than others I’ve seen—hardly larger than a St. Bernard—and “pretty” because her black fur glistened in the sunlight as if newly shampooed. Given that it had rained all the previous day, maybe she’d indulged herself.

With no camera nearby, I’ve found photos by ArtTower on Pixabay of a bear that could be her twin:

She sauntered toward the house, stopping in the middle of the yard, seeming to watch something. I discovered later that my son had stepped onto the tiny deck outside our closed-in porch for a better look. She was contemplating him, considering what to do, and then having made her judgment, she turned slowly, and just as slowly walked back into the woods where she disappeared. 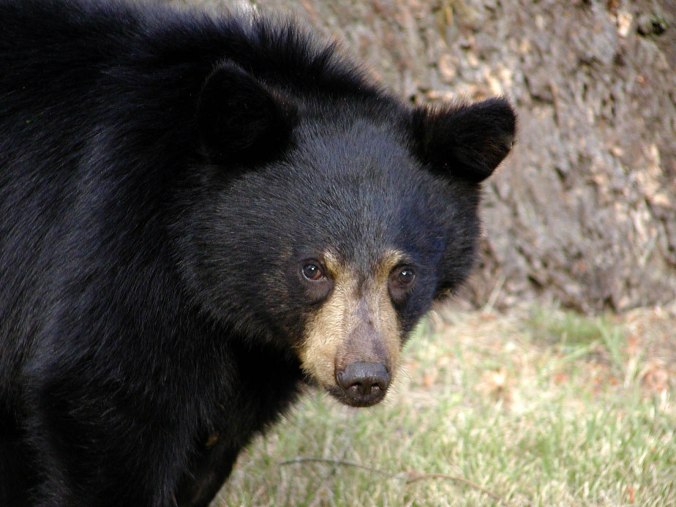 Black bears are shy and careful.

My husband once came face to face with a black bear in the mountains. They both turned into statues, and then in silent agreement, retreated in opposite directions. At least the bear hadn’t been startled…

In an old book sitting on my shelf, a writer describes how, while in British Columbia, he “chanced to flush a black bear that was browsing unseen in some bushes close by. Startled and bewildered, the poor beast charged out excitedly and, in its panic, tumbled over itself, scrambled up, and bolted off, galloping as fast as its clumsy fat legs would carry it. A guide met the bear five miles away, still streaking along at full speed, crashing through the bushes and making enough noise for a dozen animals its size.”

Even though shy, black bears can be dangerous, nearby cubs being a prime cause, but people who innocently encourage these small bears via trash cans or tossing leftovers to them are allowing them to become too used to humans. So, what was attracting this bear in my yard? The birdfeeder with its suet. We’ll have to keep an eye on things.

President Theodore Roosevelt went on a bear hunt but found no bears and so when dogs cornered a small black bear, he was encouraged to kill it. However, he thought it unsporting and refused. (Why he’d ever shoot a bear for anything other sustenance is beyond me.) Hearing about this, Clifford K. Berryman of the Washington Post created a cartoon called “Drawing the line in Mississippi.” The public appreciated both the incident and Berryman’s depiction of it, and before long, enterprising toy makers were manufacturing stuffed bears, which they of course called “teddy bears.”

(When I was a child, the belly of my deep red teddy bear eventually erupted into a Vesuvius of sawdust.)

In the Company of Bears: What Black Bears Have Taught Me about Intelligence and Intuition by Benjamin Kilham
Kilham sometimes takes in orphaned infants, caring for them with the goal of releasing them into the wild. One adoptee grows up, giving him special access to her everyday life in the forest.

Down from the Mountain: The Life and Death of a Grizzly Bear by Bryce Andrews
This is the story of Millie, a protective grizzly mom for whom mountain life turns harder as more people move into the valleys. Conservationist Bryce Andrews shows the tension caused by shrinking habitat and expanding human settlement. In the process, you’ll learn to care about Millie and her babies.

The Dancing Bear by Michael Morpurgo
Finding an abandoned bear cub, a little girl brings it back to her mountain village where it soon becomes part of the community. In time, they’re contacted by a music company that wants a dancing bear for a video. Rated for ages 7 to 9 years, it might be better for 9 to 11 years because of the sadness involved in the tale. It doesn’t end as well as one might hope.

Bear Has a Story to Tell by Philip C. Stead
“It was almost winter and Bear was getting sleepy. But first, Bear had a story to tell…” He wants to tell his friend Mouse, then he tries Duck and Toad, but after he helps them get ready for winter, no one seems awake and willing to hear Bear’s story. (Ages 2 – 6 years)

Bear Snores On by Karma Wilson
“In a cave in the woods, in his deep, dark lair, through the long, cold winter sleeps a great brown bear.”
A variety of animals and birds wander in from the cold to get warm, creating quite the social gathering, but Bear just snores on. Eventually, he wakes up to find a party in full swing in his home. (Ages 3 – 8)

Winnie: The True Story of the Bear Who Inspired Winnie-the-Pooh by Sally M. Walker & Jonathan D. Voss
Winnie-the-Pooh was a real bear rescued as a small cub by soldier and veterinarian, Harry Colebourn. She went with him to train for WWI, but a little bear can’t go to war, and so a place was quickly found for her. Both you and your children will love the story of the real Winnie. (Ages 4 to 8)

One thought on “A Bear Drops in for a Visit”