I couldn’t read at all for a while. I cleaned closets and drawers, cooked batches of meals to fill the freezer, learned how to brew my own flavor extracts, planted an indoor herb garden, made doughnuts and bread until I ran out of yeast, composed some music, and watched movies on TV, and though all of it filled the time and some of it was even productive, I needed more. I needed to escape the tension of being cooped up because of the pandemic. One day, several weeks down the road into madness, I glanced out the window and saw a deer placidly eating her breakfast in the tall grass, paying little attention to her fawn, which was leaping and bouncing and doing comical arabesques all around her. Happiness. Peacefulness.

(Image by smarko on Pixabay)

“Bambi,” I thought. “I need Bambi,” and that’s when I remembered the book I’d borrowed just before the library had closed due to the pandemic. It was a fantasy for grownups. I opened and started reading “The Catswold Portal” by Shirley Rousseau Murphy, but I did it slowly, a half chapter at a time, wanting to remain in the book’s world as long as possible.

The description on the inside of the book jacket is the best introduction to the story:
It was a masterpiece of antiquity inexplicably hidden in a California hillside garden—a door of rich dark wood with cats carved in it, cats so beautifully rendered that even artist Braden West found himself expecting them to leap forth from their unyielding woody prison. Yet it was far more than some museum-quality replica attached to a little-used toolshed. It was, though neither Braden nor any other upper-worlder knew it, a magical portal between the everyday human lands and the Netherworld below, a realm of magic, of elves and dwarves, of Harpies and Griffons, of human rebels and their cruel enslaver, Siddonie, the sorceress queen. And it was the domain, too of the Catswolders, shapeshifters with enchantments all their own, who prowled both the Netherworld and the upper one in either cat or human forms.

(Image by Al Seeger on Pixabay)

It’s seen mostly through the eyes of a Netherworlder, a young woman called Melissa, whose true nature isn’t immediately apparent, not even to her. She is of the Catswold, the shapeshifters who are sometimes human, sometimes cat, depending on circumstances. Melissa doesn’t immediately remember who or what she is and certainly not what her destiny might be, and so we travel with her through danger and pain, but also through the sweetness she finds in life. We want a happy ending for her, for this little calico, and yet we don’t want it to end at all, not during our own endless days in captivity. But it does eventually end, and thank goodness it ends well as every good fairy tale should.

“The Catswold Portal” is excellent even if you aren’t suffering from cabin fever. 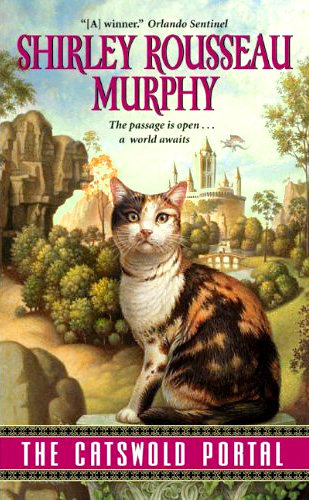